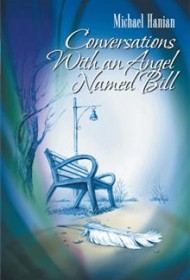 Humans continue to seek confirmation of, and affirmation from, beings beyond our realm, a fact reflected in this short novel. Conversations With an Angel Named Bill is true to its title; Max, an aimless young man, finds himself in conversation with an angel, and the shape of his world begins to change for the better. These chats are heady and strange, leading to a moving conclusion.

Author Michael Hanian sets the scene neatly in the story’s first lines. Writing in the voice of Max, he notes: “One fine day, I set out on my usual walk. Truth be told, the daylight had faded and it was in fact late evening. It was not particularly fine either … ” When Max finds someone walking beside him, that man, Bill, immediately identifies himself as an angel and thereafter appears sporadically during Max’s nighttime rambles to challenge his ideas about life, death and love.

Conversations With an Angel Named Bill has very little plot; it’s a slight book made up mostly of the esoteric back-and-forth between Max and Bill, sometimes joking, other times arguing. Bill lectures on the wisdom of children and the superiority of women and theorizes that karma is a false and potentially harmful notion. Max holds his own but is always left with much to contemplate.

While the discussions are engaging, they are likely to appeal to a niche audience of those who enjoy such abstruse philosophical discourse. There are a few spelling errors, but they don’t distract from the overall narrative.

The question of why an angel has appeared to Max isn’t revealed until the last chapter, and it’s a surprise worth preserving. Suffice it to say that Max must choose between this world and the next, with either involving a significant sacrifice. It’s a clever ending to a short but smart and well-told story.