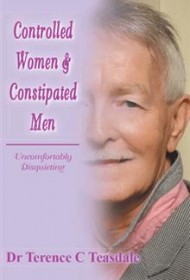 Many readers may not get beyond the first 30 pages of this book before branding Dr. Terence Teasdale a misogynistic crank. And despite some useful information included here, they would have plenty of ammunition for that claim.

In Controlled Women & Constipated Men, Teasdale argues that many, if not most, women suffer from mental illnesses that prevent them from forming healthy, loving relationships, especially with their daughters. These “controlled women,” he writes, can inflict lasting psychological and even physical damage, leaving daughters feeling unfulfilled, alienated, anxious and depressed. The “constipated men” of the title are the weak vessels that such women marry, emotionally empty husks incapable of providing the strong support desperately needed by these neurotic women.

If you bridle at the word “neurotic,” then this book is definitely not for you. Teasdale uses a long list of often much less flattering adjectives to describe women. Early on, he asserts that controlled women “develop sadistic acts of retaliation, threats, intimidation, reprisal and punishment” to protect themselves. Feminists come under heavy fire, and the author makes passing swipes at lesbians and even female primary school teachers.

Teasdale describes himself as a clinician specializing in “family psychiatry and women’s psychological disorders.” He offers little supporting evidence for his opinions on women, sometimes employing merely sloppy generalizations: “According to statistics …”; “It is known that …”; “There is little doubt in my mind …”

Despite this, it’s hard to dismiss Teasdale outright, as when he’s not wildly over-stating his precarious position, he writes cogently about psychological maladies such as narcissism and co-dependency and delivers a highly detailed, almost scholarly work that serious students of human behavior may find useful. However, even in the midst of many of these seemingly impartial intellectual exercises, Teasdale cannot resist picking at the scab that obsesses him: the disturbed mental state of women. Unfortunately, his vitriol dominates this book, meaning that his more legitimate ideas are unlikely to garner the attention they deserve.