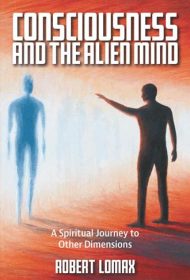 In Consciousness and the Alien Mind, a lifelong psychic channels his spirit guides—humanoids from elsewhere in our galaxy who want to communicate how we on Earth can access a higher consciousness.

Robert Lomax’s primary spirit guide is Antemedi from Andromeda. Antemedi introduces Lomax to Arksar and Orlacka, among others, who each take turns explaining how to become aware of our current ways of thinking, break free, and “vibrate to other dimensional realities and arkarnas,” among other things. (A helpful glossary defines “arkarna” as “the underlying ethos and expression of the universe.”) After much discussion of different frequencies, how judgment and comparison do not exist in their realm, and how past, present, and future are one continuum, Antemedi introduces the author to his own Creative Higher Self, who summarizes the lessons.

In light of this book’s stated goal “to advance communication and benevolent interaction with other cultures,” Lomax’s spirit guides miss the first mark and hit the second. As channeled, Antemedi and the other humanoids’ voices are indistinct from one another, even though the humanoids come from different parts of the galaxy and are presented as unique entities. This makes their explanations of concepts such as duality, paradox, or unconditional love like a firehose: an unvarying blast that quickly becomes overwhelming.

There’s a welcome moment of clarity, all-too-short at six pages, when the author describes in his own words what a visit to Andromeda feels like. That’s when the realm’s benefits of unconditional love, oneness, and energetic healing come into focus for Earth-bound readers. Despite their inability to make themselves clear, the spirit guides are kind and patient, and non-threatening; their gentleness encourages readers to press on.

There’s an endless fascination with human/alien contact, from E.T. to Erich von Daniken’s Chariot of the Gods. Readers ready to accept that we are not alone in the Universe may be willing to brave the guides’ daunting explanations for a chance to glimpse a more spiritually fulfilling existence.