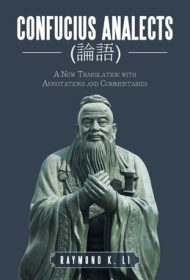 Scholar Raymond K. Li has diligently constructed a modern translation of the words and teachings of Confucius (551-479 BC), one of the world’s greatest philosophers.

The Analects were originally compiled by Confucius’s disciples after his death. For the Chinese, the work has been an enduring focal point for defining human character and purpose. In this new version, author Li uses contemporary English, including some needed annotations and definitions.

In the first of 20 segments, Confucius extols the enjoyment of learning, introducing the noun Jun Zi, referring to a person of noble character, prominent, respectable and virtuous. Such a person would practice Ren, or core human virtues. Throughout the volume, Jun Zi individuals are cited for their positive qualities, and contrasted with their opposite, Xiao Ren, those who are mean, dishonest, etc. Li is a system of rites, ceremonies and protocols that underpin orderly life at all levels of society.

A broad range of human behaviors and attitudes is expressed both by Confucius and his disciples. Their ideas sometimes exude a certain “Zen” element of surprise, as when Confucius asks students about their ambitions, and happily agrees most with one whose main dream involves dancing and singing “in the breeze and under the clouds.” Yet the master can also be strict, suggesting, for example, that people should ceremoniously honor their deceased parents for three years, just as their parents cared for them the first three years of life.

Li recommends reading the Analects slowly, with time for thought about the principals and incidents expressed. This will come naturally to readers as the concepts stimulate intellectually, intuitively, and emotionally. Repetition of words, concepts and individual names might become burdensome, but readers can easily skip over such portions. Particularly relevant are the observations regarding government and sound leadership, which will resonate in today’s contentious political era.

Overall, Li’s prodigious efforts to translate Confucius to an English-speaking audience will be greatly appreciated at this tumultuous time in world history.