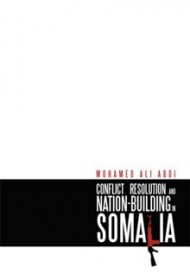 The problems facing Somalia are well-documented, but finding a political solution for a nation that has lacked an effective functioning government for 21 years will not be an easy task.

This book seeks to detail the reasons behind the collapse of the state in Somalia, and to propose methods grounded in political theory that could help improve the country’s political, economic and social stability, ultimately arguing that Somalia must have accountable, reliable state institutions for significant gains to occur. The author tackles this objective from a number of angles — drawing comparisons between Somalia and other African countries, reviewing existing literature, and assessing models of nation building.

While impressively broad, occasionally the subjects tackled in this sweeping approach seem tangential to the author’s central argument. For example, in analyzing the root causes of conflict, the author discusses the importance of human nature, referring to Reinold Niebuhr’s conception of original sin and the teachings of St. Augustine.

The book also needs some updating. Somalia’s transitional government is no longer located outside of the capital city, Mogadishu, or under the leadership of the late Abdullahi Yusuf Ahmed. The author’s assessment that the international community lost interest in intervening in Somalia in 1995 also needs reconsideration at a time when countries such as Turkey, the U.K. and U.S. are taking renewed humanitarian and political interest in Somalia.

It’s valuable to gain an overview of Somalia’s quandary from a Somali voice. And this book is exhaustive in its presentation of political theory. But as the author himself asserts, an over-reliance on “theories advanced by academics and think-tanks” does not always sufficiently explain the particularities of a country or its conflicts. The book only partly answers the question of how reliable institutions can be re-established in Somalia.

Ultimately, the author has carved out an agenda too broad to be effective in a work of this length. His thoughts will nonetheless be of interest to scholars of post-conflict reconstruction in Africa and the history of Somalia’s conflict.