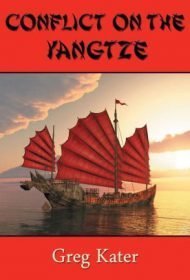 Conflict on the Yangtze is a rollicking historical adventure novel set in exotic locations with plenty of action and engaging characters.

Taking place in 1946 across China, the Philippines, and Australia, it continues the Warramunga series, following Australian intelligence agents and adventurers Jamie Munro and Jacko O’Brien as they break up an opium smuggling ring, set against WWII’s aftermath and the Chinese civil war between the Nationalists and Communists.

The novel starts with a literal bang, as an MI6 agent is killed while investigating an opium facility in China. Because of their past help with the agency, Jamie and Jacko are asked to investigate. They begin in Shanghai, joined by their wives, Carna and Monique, travelling along the Yangtze River to the ring’s hideout. Meanwhile, in the Philippines on a work assignment, Carna’s parents stumble onto another branch of the criminals’ organization. As the story escalates, the heroes, including Jacko’s half-sister Sarah, hunt down the remaining villains in rural Australia.

The book is well-paced, with fast, suspenseful action followed by quieter descriptions of the various locations, discussions about the Chinese civil war, and explanations of Shanghai’s ruling powers connected to the opium ring.

The novel frequently switches to the villains’ point of view, revealing them as so fully dimensional that some even start to seem sympathetic towards book’s end. Sarah is a fascinating character as well, a young Aboriginal with excellent tracking skills. While she can imitate her brother’s perfect English, she usually speaks in a mixture of English and Aboriginal, frequently describing things as “bikpela” (or “big”).

While the exposition can feel clunky at times, particularly when explaining Jamie and Jacko’s wartime past, and so many secondary characters appear briefly that it’s difficult to keep track of them, this does little to diminish overall enjoyment.

With the feel of an old-time adventure story, the novel will especially appeal to genre fans, but anyone interested in a compelling story will enjoy Conflict on the Yangtze.