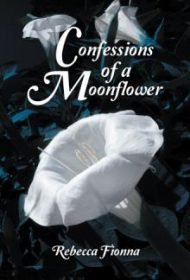 When Rebecca Fionna was in college and graduate school, she suffered from attention deficit disorder and borderline personality disorder (BPD). Although she sought help from counselors and doctors, her illness went largely untreated and unsupported from the universities she attended. In Confessions of a Moonflower, her goal “is to raise awareness for the neglectful way mental illness is approached not only in society but specifically in the realm of education.” In addition, she hopes her book will help those struggling with mental illness feel “less alone.”

In these pages, however, Fionna doesn’t offer, as might be expected from her goals, a chronicle of her academic and psychological struggles, but rather brief observations and emotive thoughts that, taken as a whole, suggest the tenor of her inner life.

Although presented as poetic lines, most of these thoughts read like journal entries, and some are so short as to compose only one sentence: “I never saw/ A shadow in you/ I could not love.” Many of the entries are followed by an italicized coda adding a comment or new perspective to the piece. For example, after the short poem “Sometimes/ I am so sad/ I cannot write,” she adds “There is nothing poetic about despair.”

Fionna’s poems cover a range of topics, from relationships (“I cut out my spine/When I decided to give you up”) to feelings of rejection and melancholy. Often, they embody the turbulence of emotion that characterizes BPD (“…I wanted to scream/ Louder than a storm”). While frequently the work is declarative, employing few poetic devices, her imagery is sometimes intriguing (“Her eyes drip blue ink/ Staining her glass skin…”), and she offers occasional fresh insights and effective motivational moments (“Ignite everything you touch”).

Overall, though, this work feels deeply personal. As such, it may have a hard time attracting general readers. As artifacts created by someone with BPD, however, these poems may, indeed, help others suffering from mental illness feel less alone.