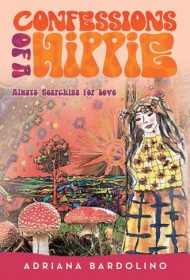 Adriana Bardolino’s joyful memoir takes readers on a trip to the center of American hippie culture at its psychedelic height. Based on journals she kept in her early 20s, from 1967-1975, and written after she retired, Bardolino’s well-paced story depicts the free love, mind-expanding drug use, and tumultuous politics the era is known for.

Bardolino was a pretty Italian girl from the Bronx with training in fashion design and a rebellious streak. In 1967, she followed a boy to California on the famous Love Bus, arriving in time for San Francisco’s Summer of Love. She joined the throngs at free People’s Park concerts with bands like Jefferson Airplane and the Grateful Dead. And she created a close group of like-minded friends who bounced between coasts as their whims and meager funds allowed.

Monogamous love with a series of handsome, largely respectful boyfriends drives the peripatetic story. But Bardolino’s casual commune of friends in upstate New York centers it, no matter which boy shares her bed with the barn-door headboard. A typical day involves tripping by the stream, painting each other’s naked bodies with wet rocks, listening to the new Beatles album, and plucking dinner ingredients from the garden.

Bardolino’s unabashed romances and many close friendships, recorded here without hindsight or judgment, are delightful. Limited conflicts and hardship occur, including abortions, described with sensitivity. But the pseudonymous hippies described here eventually blur together, and by 1974, she realizes she’s outgrowing commune life. It’s a relief when she admits her drug use is masking feelings and keeping her stuck.

The story’s only significant flaw is that it ends in 1975, with the author starting anew in Hawaii. We’ve grown to love this free-spirited hippie girl but have no idea what happened to her: how she applied these lessons learned, and whether she found love.

Nonetheless, for those who experienced hippie culture and those who wished they had, Confessions of a Hippie is the best kind of trip.