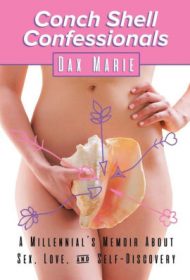 Dax Marie chronicles her dating life from her high school years through her mid-20s in Conch Shell Confessionals.

After graphically depicting a sexual encounter in the first chapter, Marie confesses that the incident never occurred. Instead, she uses the fictional episode to introduce her struggles in the millennial dating world.

Born in 1992, Marie grows up in California with two siblings whom her mother raises alone after her father abandons them. She eventually graduates college and seeks “a man who completely loves and obsesses over me.” Alone on New Year’s Eve, 2011, she decides to “go bold.” Subsequent chapters chronicle a six-year span during which the self-described “horn-dog” drinks and table-dances through various relationships, most of which end badly. With the dissolution of each, she develops increasing self-awareness and resilience.

Marie describes her exploits in a conversational, no-holds-barred tone (“Why did I allow myself to be pursued by a man whom I thought was a disgusting piece of shit…?”). The brief tales flow smoothly, except for extraneous footnotes (i.e., 4. “Man, I really make myself sound like a ho”) and a two-sentence chapter the author implies has been censored; for the missing story, she directs readers to her website, which features an account of her dream in which she makes an elephant orgasm.

This kind of gimmickry and shock value detract from any pronounced sense of sincere reflection and maturation. And although her use of online dating platforms adds a modern spin on the search for love, her message is familiar: “Find yourself, know yourself…and know that you are worth it.”

Overall, enjoyment of Marie’s memoir will depend on a reader’s comfort level with her sense of humor and frank, sexually oriented material. As the author notes on the back cover, it’s not just a book about self-discovery—but also about the “tough lessons” that only come from having to “pick yourself off the floor… and clean some curious stains off your dress.”