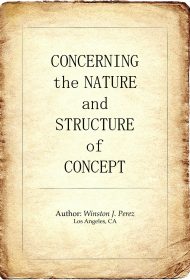 In 1989, Winston Perez had a revelation. While reviewing a new design for a newspaper he published, he discovered the basis of a discipline he calls Concept Modeling. Concept Modeling takes any idea—be it a new product or a movie franchise—and breaks it down to the underlying conceptual building-blocks that define it. His book provides a theoretical treatment of Concept Modeling, defining the key terms, introducing neologisms, and laying out the discipline’s principles, with a few examples.

Perez has rediscovered something close to Plato’s Theory of Forms. For the author, concepts dwell in their own universe; yet they determine the essence of everything in ours, be it a material object, an idea, or fictional character. Intuition is required to recognize the key concepts that define the essence of any object.

The author is deft at his new skill, including Concept Models of baseball and the cartoon character Bugs Bunny. He breaks down baseball, for example, through a Socratic inquiry into its nature, structure, activity and philosophy. Examining the most obvious concepts—”ball,” “bat,” “throw, hit & catch,”—Perez diagrams their relationships to each other and to wider concepts, attempting to explain the sport’s essence. “Numbers,” he notes, referring to the distance between bases and the span from the pitcher’s mound to home base, among other critical numerical elements, make the sport “almost perfect.”

While never mentioning God, Perez’s work has a theological flavor. Like God, Concept (singular, Perez insists) is omnipresent and all-powerful; it creates everything yet remains mysterious and ineffable.

The author is an excellent storyteller, and the book brims with insight. Some readers, however, may wish for a less abstract narrative. Chapters like “The Universal Laws of Concept,” written in numbered paragraphs, à la Wittgenstein’s Tractatus, are airy and unnecessary, and step-by-step instructions for Concept Modelling and more real-life examples would be a welcome addition.

Regardless, Perez provides a startlingly fresh perspective of our world that will appeal to readers in creative fields as well as the philosophically minded.