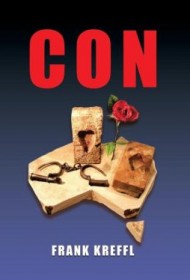 Greatly expanded from a version published in 1979, this engaging and illuminating — if overlong— historical novel is set in the early 19th century and tells of the first years of the English settlement of Australia when the continent served as the Empire’s dumping ground, a place of penal colonies and discontent. From its opening scenes of brutality, Frank Kreffl’s book evolves into a coming-of-age story told against a background of sadism and violence, leavened only occasionally by touches of compassion and humor.

In one of these prison camps, young Con Stairs gradually grows up under the gentle tutelage of Kevin, an otherwise angry Irishman obsessed with schemes for revenge against those who have wronged him as well as against the English who occupy Ireland. From him, the boy learns about survival in this bleakest of atmospheres until he escapes captivity to join a gang of thieving and murderous highwaymen, only to be returned to shackles and, at one point, condemned to the noose.

At the camp, meanwhile, the new superintendent, Captain Charles Loveday, is thrust into confrontation with both the prisoners and the system itself, all the while trying to maintain the awkward, passionless marriage he more or less fell into. Over time, he establishes a precarious tranquility by reducing floggings, encouraging prisoners to create a theater company and, most important to reducing tensions, moving part of a women’s camp closer to the men and permitting contact between the sexes.

Kreffl’s attempt to resolve the multiple plot lines may make the novel too long for some. At 1,067 pages, it’s obviously no breezy read. But the story’s fine sense of pace, clever plotting and sharply etched characters make up for the excess length. The author’s polished writing skills win out, enabling him to skillfully walk (as he writes at one point) “that nebulous border where fact and fiction blend and the passage of time makes the one indistinguishable from the other.”