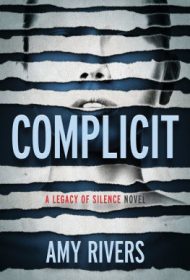 Amy Rivers’ Complicit is a romantic suspense novel set in Alamogordo, New Mexico, where protagonist Kate Medina grew up and is now a psychologist at the high school she attended.

Kate worked as a forensic psychologist until being raped by an inmate when she worked at a prison. Now, she suffers recurring, crippling panic attacks—an affliction exacerbated when a student at her high school, Gabby Greene, is murdered. Kate struggles to stay on an even keel as she counsels traumatized students.

Soon, she’s drawn into the murder investigation by Detective Roman Aguilar. Aguilar was Kate’s best friend in high school. But just as Roman was becoming more romantically inclined toward Kate at the time of their high school graduation, she abruptly departed Alamogordo, straining their relationship.

The investigation throws Kate and Roman into uncomfortable proximity and puts them on the firing line as they discover a ring of sexual predators composed of elite members of Alamogordo’s business and political community, who don’t want to be exposed. Kate and Roman face threats, intimidation, and assaults.

Complicit moves quickly during the book’s first half, with enough hints and half-glimpses of what’s to come to keep readers turning pages. But then, the story falters. The broken high school friendship isn’t enough to sustain the romantic tension throughout the story or to explain why Kate and Roman, now in their mid-30s, studiously avoid each other like teenagers after a fresh break up. Also hard to believe is the fact that seemingly everyone in town is either involved in the ring of predators or has been co-opted to keep silent.

Just when the action should heat up, it fizzles. After an important scene with Kate and the villains, there’s no follow up, no final confrontation, no real resolutions. The book doesn’t end; it simply stops.

Complicit starts with promise, demonstrating the author’s potential, but the disappointing ending will ultimately leave readers feeling let down.

Also available as an ebook,