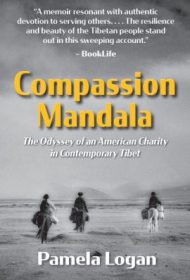 Pamela Logan’s Compassion Mandala is the story of her Los Angeles-based Kham Aid Foundation, which operated until global unrest, earthquakes and the Great Recession led to its demise in 2010.

Logan is an adventure addict who grew up loving to climb and, in college, also became devoted to Shotokan karate. She married those two passions in 1990 by setting out for Tibet, seeking steep mountains and the legendary Kham Warriors who protected Tibet from Chinese invaders. She wound up spending two decades exploring the country, working on preservation projects and eventually founding the non-profit Kham foundation to help Tibetans living under Chinese rule.

Her book is a tightly focused look at the details of running an NGO and adapting it to acts of God, regime changes, economic tumult and evolving concerns. One remote village needed a school, for example. Then girls needed help paying tuition, and Chinese textbooks required translation and reprinting, and so on. Logan assembled teams to brainstorm solutions and deal with setbacks.

Throughout this chronological narrative, readers will find rich descriptions of alpine villages at the end of nearly impassible trails, high above “our last link to the modern world.” Overly generic maps make it difficult to follow along on most of those journeys, however, and Logan’s fact-based storytelling makes it hard to develop attachments to people she meets.

Given its subject matter, Compassion Mandala could have been a dramatic rollercoaster ride through exotic locations and crushing poverty. Instead, the author, an aeronautical engineer, writes in an academic manner, holding emotions at arm’s length and offering only this enigmatic, Zen-like conclusion: If the Dalai Lama cannot rescue his country, then what can an ordinary person do? “Turn away from unresolvable conflict, let go of what is hopeless, and embrace those things one can shape with one’s own hands.”

Logan’s textbook-like narrative will likely deter general readers. But her book should hold special interest for students of Asian Studies and Tibetan Buddhism.