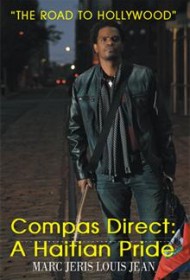 Compas Direct is a genre of dance music created by Haitian saxophonist, composer, and bandleader Nemours Jean-Baptiste in 1955. The music is associated with Haitian cultural nationalism and is popular in the Caribbean and throughout the Haitian Diaspora around the globe. Author Marc Jeris Louis Jean provides background on trends in Compas Direct music since its inception in the 1950s, its regional variations, and its most influential exponents.

Louis Jean also discusses what he views as the obstacles to the music’s acceptance worldwide. The subtitle “The Road to Hollywood” represents the author’s focus on mainstream success outside of the Caribbean, particularly in North America. The book attempts to inform an English-speaking readership of the landscape of Compas Direct, while it also engages in polemics regarding the Haitian music industry.

The book assumes, however, that its reader is familiar with the Haitian music scene. For its target audience, the book needs deeper historical information on the origins and characteristics of Compas and the context in which the music continues to develop. The book is hampered by a confused structure. It mixes together contemporary news reports, historical background, bios of contemporary artists, and assorted inspirational quotes in a haphazard manner.

Originally written in French, the translation frequently fails to meet the standards of idiomatic English. For example on page 27 we read, “He had responded well to critics to his songs and pleaded the following of arguments according to the interlocutors…” This is a translation that has not yet arrived at its target language.

Despite its flaws, the author’s cultural pride and genuine love of the art shine through. The book succeeds in gathering together information about the Haitian music scene that will be of use particularly to those who are already informed about trends in Caribbean music.