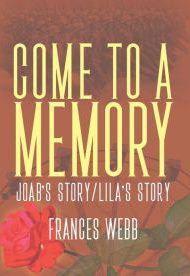 Radio broadcasts by Lowell Thomas as war breaks out in Europe and the 1939-40 New York World’s Fair help provide context for this story about a changing world as experienced by 9-year-old Lila Dodge.

The subtitle, Joab’s Story/Lila’s Story, is misleading.  Set in New Jersey, this narrative is told only from Lila’s point of view. Everything readers learn about Joab, the German boy who finds refuge with a family in her home town, comes  from Lila.

Lila and Joab are both misfits at school. Joab is Jewish and used to being ostracized. Lila wears the wrong clothes, can’t jump rope or roller skate and has an odd family on the brink of financial ruin. Her cantankerous grandfather is considered the town eccentric, and Lila’s extended family lives together in a “big, ugly haunted house.”

Initially, Lila mistakenly believes that by snubbing Joab as others do she will somehow become popular—or at least accepted. Despite her best efforts to distance herself from him, however, Lila is ultimately drawn to the boy with numbers tattooed on his arm.

The novel’s most successful elements involve Joab. Having witnessed the horrors of Nazi Germany, he’s sensitive, intelligent and a character with some depth. The author also can effectively evoke a scene. Trying to understand the war, based on Thomas’s newscasts, Lila recreates battle scenes in her bedroom using paper dolls and such items as raw meat and old bones. The stench practically emanates from the pages.

But too many characters simply aren’t effective. Webb portrays the young narrator as whiney and selfish. Lila’s relentless inquisitiveness and self-absorption soon wear thin. Meanwhile, Lila’s grandfather is mean to everyone; her father chooses to reminisce about WWI rather than be in the present; and her mother has little personality, spending most of her time in the kitchen.

Ultimately, the many unsympathetic characters greatly limit the book’s appeal. The subject matter, however, might draw those interested in the era.