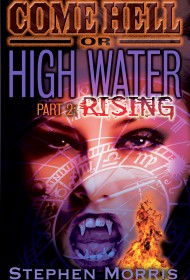 Magdalena, a goodhearted Czech secretary who works for a professor of medieval literature at a Prague university has embarked on a mission to help the spirit of an old woman burned at the stake back in 1356 find some semblance of peace. Two enigmatic people have come forward to assist: George, a Jesuit scholar from New York; and Elizabeth, a beautiful Dublin professor. What Magdalena doesn’t realize is that the duo are much more than academics – Elizabeth is, in fact, an Irish vampire known as a Dearg-due – and that their motivations for helping Fen’ka, the old woman, are decidedly apocalyptic.

After a group of professors visiting Prague for conferences find out about Magdalena’s strange quest, they set out to stop her and her two acquaintances – with disastrous consequences.

While the chapters set in medieval Prague are certainly entertaining and enhance the narrative from a historical perspective, their unwieldy length detract from the novel’s momentum and ultimately diminish its impact. Although the main story set in modern day Prague is briskly paced and action-packed, the medieval excursions – which were meant to exemplify the ongoing consequences of Fen’ka’s curse – are simply too long, taking up 207 of the novel’s 566 pages: almost 40%.

But even with the cumbersome historical speed bumps – and less-than-satisfying conclusion – this is an intriguing novel. The exploration of various European myths and legends is the fuel that powers the storyline, and the understated use of supernatural characters (ghosts, trolls, etc.) throughout gives the novel a darkly magical but realistic tone.

This is a highly intelligent – albeit imperfect – saga that will appeal to fans of folkloric fantasy and historical fiction.