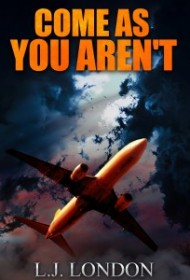 Linda London’s first novel is an evenly paced thriller that aims to find intrigue in the inner workings of the airline industry. Come As You Aren’t takes us behind the scenes at a multi-billion dollar airline, where dirty deals have come to light with devastating consequences.

Welcome to Zebra Airlines, where Nancy Kypriana has just been promoted to Payroll Manager, a position that comes with a major challenge. His name is Neal, and he’s Nancy’s assistant. Neal runs the department almost single-handedly and is stingy about giving his new boss any meaningful information. Nancy can’t help but wonder what he is hiding.

Readers, unfortunately, already know the answer. London makes his involvement in a money-laundering scheme quite explicit early on. From the moment we meet Neal, we know we can’t trust him; he’s skimmed millions of dollars in company funds, and spends his off hours realizing his sadomasochistic fantasies. He’s not a good guy.

Just how bad Neal is remains to be seen, and this is where the story picks up momentum, as the crimes escalate and we can’t be sure if Neal is responsible for all of them. Several innocent people are destined to meet gruesome ends before Nancy can uncover the truth. Nancy’s romantic entanglements add intrigue to her efforts, as one of the few mysteries here is whether or not she can trust either of the men vying for her attentions.

Instead of deeply developing these characters, however, London returns repeatedly to the intricacies of international money transfer and airline staffing procedures. Her explanations are thorough and easy to understand, but the minutiae grates after a while, and readers may wish she had only summarized the paperwork and given more details about the characters’ thoughts and feelings.

A solid, if not spectacular, debut novel, Come As You Aren’t is a quick read, sufficient for several hours of entertainment, but unlikely to stick in readers’ minds for the long term.