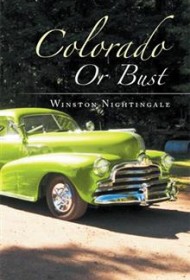 In this memoir, author Winston Nightingale introduces a host of family members—parents, grandparents, aunts, uncles, etc.—but focuses mainly on his childhood growing up primarily in California and later in Colorado and Kansas.

The book recounts many tales about helping on the farm, going to school, and participating in innocent mischief, even though his parents were strict and spankings were the norm. At 17, Nightingale returned to California to work in the building industry, then eventually opened an upholstery business in Kansas with his wife, which they ran for 14 years.

Nightingale and his extended family are Mennonites, and he writes of how he and his siblings were forbidden to go to a neighbor’s house “because they were worldly”—that is, they had radio and television. He also recalls how people stared at his family—men with beards and women with covered heads—during an outing to Yosemite.

These are interesting episodes, but unfortunately Nightingale’s reminiscences are jumbled and randomly crafted. Even the title is odd, as the action bounces between California, Kansas and Colorado, with Colorado arguably the least significant.

The author’s faulty memory—he often admits he can’t recall pertinent parts of his stories —will also leave readers baffled and frustrated. For example, Nightingale, 67, recounts a childhood escapade where he threw an unripe peach against the windshield of a passing car. A chase ensued with the angry driver gradually gaining ground and about to grab Nightingale as the youngster tumbled through the door of his grandparents’ house. The man told his grandma Nightingale needed a good beating, but readers are left hanging as the author weakly concludes: “… to this day, I don’t know what happened to me next.”

This book might have had broader appeal if the author had included more about growing up a Mennonite and how this shaped his world. Instead, he leans heavily on mundane events that will, unfortunately, have little relevance to anyone outside the family.