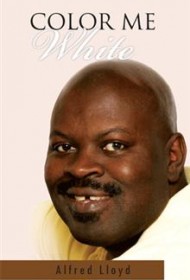 The poems in Color Me White aim broadly to describe the harsh conditions of today’s world and to present the speaker’s wishes for improvement. There is an evangelical component to the collection as well, such as when readers are advised, “Loving the truth and its light/ Will make JAH your friend for life.”

Author Alfred Lloyd shows his disillusionment with modern society’s values in poems such as “Poverty’s Riches,” where the speaker laments, “NO/ It’s not that/ There’s no cash/ To care…/ / But…/The priority/ is on/ The bombs of fear.” Likewise, he advocates for a better world though lines such as: “And there will be/ No more room/ For divisive politics/ Violence…wars/ Or racial prejudice” from “Wither the 21st Century.”

While such ideas are welcome, conceptually this collection confuses and potentially alienates readers from the beginning, since the title Color Me White is paired with the face of a smiling black man. The reader wonders if this man wishes to be white, creating uncomfortable feelings surrounding his presumed internalized racism. It isn’t until page 136 that readers encounter ”Color Me White,” which provides some context for the title: “Color me white/ I’ll color you black/And for this moment at least/ Let’s sign a pact// […] Now that you are black/ And I am white/ Is there still a need/ For us to fight.” Readers conflicted by the title and cover image may not make it far enough to reach this message of racial harmony, however.

Stylistically, the poems do not transition seamlessly one to the next. Each is printed in its own font and size, using idiosyncratic punctuation and seemingly random enjambments. The rationale behind the poems’ formatting and sequencing is unclear, and the collection overall lacks thematic and structural cohesion.

Color Me White will likely hold appeal for the poet’s friends and family, but it is not sufficiently developed to reach a wider audience of poetry readers.