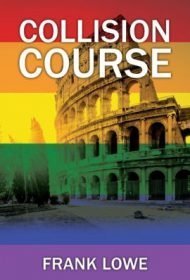 The plot unfolds in cinematic bursts, beginning with filmmaker Bentley Thornton, who is ordered by his adoptive crime boss father to eliminate a journalist who has been framed for terrorism. The crime boss believes the journalist, Scott Dennis, has tipped someone off to his human trafficking operation.

The paths of the fugitive reporter and fledgling hit man, of course, eventually cross — in a romantic way—but not before the action hopscotches from suburban D.C. to England and Rome and back again. As the plot unfolds, there are fixer lawyers, Vatican intrigue and carnal attraction of the gay kind. There are assumed identities and sweet revenge, familiar tropes doled out like Halloween candy.

At times, it seems as if the author is throwing plot points against a wall to see what sticks: A Cardinal trying to sell a priceless painting on the black market. A rogue Interpol agent on the payroll of a kingpin. A Machiavellian fixer who manipulates those in his orbit like chess pieces. At 478 pages, a lot happens. Oddly, though, the plot is slow to advance its overarching narrative; the main characters don’t even meet until the midway point. Nonetheless, Lowe has an engaging writing style that keeps pages turning.

As with Collins’ books, these characters are more archetype than flesh and blood. And the Brown factor is the catacomb of a plot — one that some readers may find overly complex. Admittedly, this isn’t a perfect read, but fans of the genre will find rewards in Lowe’s winning writing style and the story’s generous helping of action.