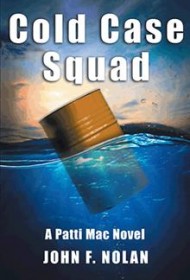 Author John F. Nolan is a veteran homicide squad commander, an experience that informs the crime-gathering elements in his fast-paced, if uneven, thriller.

Detective Sergeant Patricia “Patti Mac” McAvoy more than has her hands full with her new assignment, heading up the Cold Case Squad in the Homicide Squad South division of the Nassau County, NY, Police Department. The squad is run by a powerful and corrupt captain consumed with undermining McAvoy at every turn, and he’s not shy about employing his loyal foot soldiers to make her life a living hell. The resilient McAvoy nevertheless proves herself a fearless detective, especially when her investigations reveal a cover-up involving the captain and other powerful figures.

Nolan’s policing background lends the novel a richness borne from experience. While the plot doesn’t exactly break new ground, it has a convincing character in McAvoy and moves at a fast clip.

However, the story suffers from several flaws. First, virtually all of the traits of Cold Case Squad characters are conveyed in an inartful fashion. For example, Brennan, the police captain, is portrayed as a sexist, Constitution-ignoring tyrant by essentially telling McAvoy that he’s a sexist, Constitution-ignoring tyrant. (“Let me tell you, Missy, it’s no pleasure [to meet you]… The Supreme Court has no standing in this office… No one gets a lawyer until a signed confession is obtained… Oh, and uh, try to keep the office romances to a minimum, will you dear.”)

In addition, exposition is unnaturally forced into the dialogue throughout, and the book remains in need of a more thorough proofreading to correct repeated issues with punctuation and spelling.

It’s to the author’s credit that the investigations in Cold Case Squad feel informed by a real-life understanding of crime scenes, interrogations and the process of building a case. Unfortunately, this strength is overshadowed by the many issues with the writing itself, resulting in a story that’s likely to have limited appeal without revision.