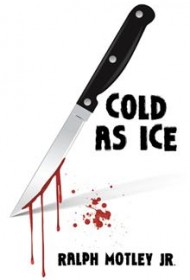 Fans of James Patterson know that suspense is amplified by chapters that hit like karate chops, propelling the story forward. There’s some of that wham-bam action on display in Cold As Ice, an ambitious mystery that fans of the genre should enjoy.

Detective Zack Townes has his plate full: Working alongside his girlfriend and trying to blend their two families has proven to be a challenge, and now Tilton, Virginia appears to be hosting a serial killer on their watch. Dipping in and out of the sexual underworld (the murders have a kinky bent to them), Zack also has to keep tabs on his teenage daughter, who may be working in the skin trade herself. And there’s a drug cartel to take down; if crime doesn’t pay, it sure never stops working. The story jumps back and forth from Zack’s point of view to the killer’s, and scenes build tension, nicely leading up to the conclusion.

Author Ralph Motley Jr. has a terrific ear for noir fiction. When Zack asks a friend for information and presses him for proof, his friend shrugs. “Grapevine’s grapevine. If you want absolute truth, go to church.” Scenes unfold with precision, and minimal typos.

With so much going for it, Cold As Ice falters roughly two-thirds of the way through. There’s some crude comedy that detracts from the crime story and a resolution that feels rushed and inadequate.

Despite the hasty ending, Cold As Ice could still be a hit with those who like a gritty tale of sex and murder. With a bit more polish, this could easily be the beginning of a successful series.