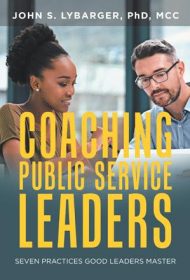 Lybarger has been coaching clients from the private and public sectors since 1993 and has worked with federal agencies that include the departments of Defense and Treasury, the Environmental Protection Agency and the Social Security Administration.

Federal agencies, he notes, “seem to struggle with the process of defining their leader competencies” and often ignore the list of “executive core qualifications (ECQs)” already laid out for them by the U.S. Office of Personnel Management (OMP). Lybarger aids that process by defining the generally accepted seven practices of leadership and meshing them with the OMP’s core qualifications.

Along the way, Lybarger demonstrates his approach to executive coaching through meetings he conducts with a fictitious client named Michael. The beleaguered Michael’s been promoted into a leadership position in his agency with little preparation. He’s pressured to produce results, but his new employees aren’t performing and he’s afraid to reprimand them. His “Coach” helps him take command of his leadership position on both emotional and practical levels.

Some of the book’s fictional dialogue can sound stilted, such as Michael’s statement at the beginning of Chapter 5: “The main obstacles I’m facing right now are navigating through the complexity, chaos, ambiguity, and constant change I face day in and day out.” But most readers will look past this flaw for the helpful role modeling such conversations provide.

In addition to solid guidance, Lybarger’s workbook format provides chapter summaries with “crosswalks” from his leadership practices to the OMP’s core qualifications, extensive lists of additional resources, and assessments and planning tools coaches can use to evaluate their progress.

Lybarger wrote this book for a specialized audience and shares his knowledge gracefully, without ever veering into the didactic. Readers in this field will find his advice valuable.