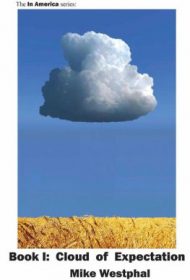 Every poetry collection, if the author has found his voice, has a stance, an Archimedes point from which the writer lifts the world of his creation. In Cloud of Expectation, Westphal’s collection of prose and free verse, the stance is primarily one of contemplative nostalgia.

Cloud of Expectation is divided into four sections: “Neighborhood & Town,” “Pioneers,” “Storing the Fat,” and “Odds & Ends.” Each contains a mix of poetry and short prose pieces.

Many of the pieces depict life a generation ago in small town America where “ladies who sat on the front porches/wore long, light dresses…” and boys “at the drive-in,” sprawled “in giant cars the size of boats.” Nostalgia seeps through his portrayal of his parents’ and grandparents’ times, derived from stories handed down and newspaper clippings.

“What I am,” states Westphal, “is a careful detective on the trail of the American character.” That’s an elusive thing, and Westphal seems to sense that it’s found in more than just idyllic details, so he leavens his writing with ruminations on such topics as the dangerous coal mines, “where men descended hundreds of feet in elevator cages,” and the poverty that made men like his father enlist just before WWII.

Collectively, Westphal’s collage of narrative and lyric offers some apt insights and vivid images of past times: e.g., “His hands longed for tools”; “He was a gas flare/burning in the night, streaming over black marshes.” Too much of Westphal’s poetry, however, suffers from abstraction (contemporaries “who lusted for the prerogatives and accoutrements of adulthood”), and diffuseness that comes from lack of precision (“The memory, or the fact, or the smoke, or the drama of WWII”). His narrative pieces also lack detail. Noting that his father scouted a “riverbank community” for a stolen boat, he omits the specifics of that scouting.

Overall, Cloud of Expectation is an uneven collection. Still, it shows promise. With careful revision, Westphal clearly has the ability to transform it into an engaging, mainstream work.