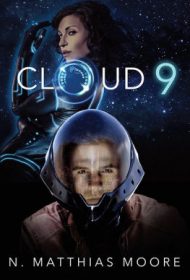 Set in 2109, Moore’s story centers on protagonist Michael Tillman, a human symptom of a world marked by “uninhibited debauchery,” “cultural collapse” and a reliance on technology and virtual reality. Most of the population is “drowning in a haze of virtual reality parties,” and at age 29, Michael is still living with his parents with minimal skills, direction or purpose, with one exception: He has ambitions as a virtual gamer.

When he receives notice from Real Games Enterprise offering him a chance at a virtual utopia, an individualized paradise “free from the folly of our world,” Michael finds a mission and chance at redemption. Still, the stakes are high in this quest for an online paradise. Michael must clear nine levels with only three lives; if he loses those lives during play, he dies for real.

This quest serves as a springboard for subplots and themes rooted in questions of reality, government control and mental health. The game’s developer, for example, is a disturbingly convincing villain simply named The Manager; he’s developed the challenge to control the population, and Michael’s run through the game is pivotal to its eventual success.

Although Moore delves into a world steeped in gaming culture, virtual reality vocabulary and technology detail, he writes with an immediacy that makes those aspects approachable for most readers. The story is written in present tense, which adds to the sense of immediacy and intrigue.

While Moore’s narrative occasionally becomes dense, and the text contains a few spelling and grammar issues, these problems don’t take away from its all-too-relatable themes. Readers will relish its consistent sense of action and intrigue as they ponder Cloud 9’s thought-provoking questions.