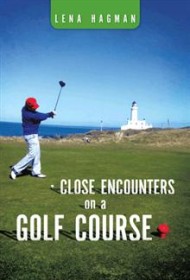 Writing in English in the hopes of reaching a wider audience than her native land would provide, Swedish economist Lena Hagman reveals her love of golf, and of those who play the game, in these 19 vignettes culled from three decades of playing as a “single” in what was, until recently, a man’s world.

Hagman has two daughters and was engaged at the time the book was written, but she reports that none of her immediate family is much interested in golf. Thus, the author, a single-digit handicapper, has traveled to Turnberry, St. Andrews and other great courses alone. In Close Encounters on a Golf Course, she relates the experience of being paired with strangers, most of them male, in a pursuit that reveals the true personality of each individual. Most of her chance encounters are positive, and some of them have resulted in life-long friendships, while others have only provided the sense of joy that lasts the four-to-five hours spent on the links.

And “joy” is the key word in these short essays. Hagman excels in relating the transcendence she feels by merely setting foot on the hallowed grounds of golf’s iconic courses. Those who share her passion for the game will find it easy to understand this feeling. Unfortunately, non-golfers who try to read the book will likely be mystified by her exuberance.

While frequent misuse of vocabulary and unusual sentence structure make it obvious that Hagman is writing in her second language, these minor foibles only add to the simple charm of the narratives.

The author leaves some questions unanswered in essays that relate to her personal life rather than her time on the links. But overall, Close Encounters on a Golf Course is a delight. Any golfer lucky enough to be paired Hagman would have the time of his life.