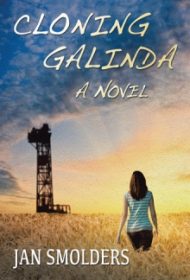 Although the word “cloning” suggests science fiction, Cloning Galinda is an eco-thriller with nods to the environmental concerns of hydraulic fracturing (“fracking”). Professionally written, well-paced and topically relevant, this book offers an entertaining, if somewhat flawed, reading experience.

College-educated and bilingual divorcée Mary Jenkins has moved back to her hometown of Noredge, Ohio, to raise her two boys and teach school. While she’s deeply in love with her 18-month, live-in boyfriend, Joe, his dangerous job hauling the local oil company’s “dirty water” to special injection wells causes her concern. And it’s that same oil company that chooses Noredge for their next fracking site.

Dismissive of Mary’s warnings about how fracking can precipitate methane gas leaks, poisoned water and/or earthquakes, the town’s residents are easily lured by the oil company’s promise of big dollars for land-leasing contracts. And so the raping of Noredge begins.

Author Jan Smolders expertly details the fracking process, and characters’ physical descriptions are often terrific (“his white, long-sleeved, expertly ironed shirt wore its starch proudly…”). However, most of the characters strike a singular note: Mary is either indignant or weeping; Joe is a two-dimensional stand-up guy; boss Doyle is an evil cardboard character.

But most problematic, the story is rife with logical missteps. For example, Mary has “deep roots” in Noredge and lives on her family’s land, yet no other family member is ever mentioned. Meanwhile, stand-up guy Joe, with his dangerous occupation, never considers marriage, leaving his loved ones deprived of any financial protection. And in broad daylight, in two separate instances, both the “respectable” Noredge manager and the company CEO suddenly, implausibly attempt murder.

The story would resonate more if the plot had a few less wrinkles. Still, with fracking as its nucleus, Cloning Galinda adroitly juggles corporate espionage, family, betrayal, romance and the greed that enlivens many a suspense story.