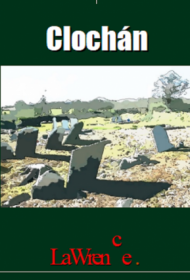 Clochán is a historical novel set in Ireland in the years following the Irish Rebellion of 1798 during which the United Irishmen, with Catholic and Protestant support, engaged in a doomed insurgency against British rule and Irish loyalists.

The novel focuses on the coming-of-age of Kevin Neal, whose family members are slaughtered during a failed rebel attack. Orphaned, Kevin is taken in by the Walshes, a sympathetic farming family, and integrated into a rural community rife with superstition. Following a series of violent attacks prompted by local landlord Caesar Colclough, the Walshes relocate to Tintern Abbey, County Wexford, to work for populist landowner John Colclough, whose treatment of his tenants is more humane than his estranged cousin Caesar’s.

However, poor relations between Catholics and Protestants and political friction result in continued tensions and sectarian violence. When a series of brutalities reoccur, mirroring those at the Walshes’ former tenancy, locals believe a nefarious spirit linked to Kevin, called a Puca, is to blame. However, it becomes apparent there’s more to the murders than meets the eye.

Kevin is a scrappy protagonist, whose optimistic resilience is commendable. His child’s-eye-view of events and subsequent maturation renders the novel’s complexity accessible, offering readers insight into the machinations of a divided country.

While some may find the novel’s bloody climax a bit excessive, it serves as a thrilling and satisfactory resolution to the central murder mystery. A romantic subplot involving Kevin and his displaced childhood sweetheart is emotionally honest, as are Kevin’s relations with a gallery of supporting characters. Clochán’s dialogue provides humour and richness to its characters.

By turns brutal, comedic and intimate, Clochán is a well-researched, intricate novel that will appeal to fans of historical fiction and coming-of-age narratives alike.