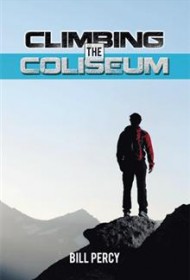 In this engaging novel, psychologist Ed Northrup struggles to cope with depression, his so-called “black dog.”

As the book begins, Ed stands on the precipice of the Coliseum, a mountain above the Monastery Valley of Montana. Frightened by his thoughts, he pulls back from the edge and returns to his daily life. With depression lurking, he fulfills his obligations in the small town and soon becomes enmeshed in a hate-fueled criminal case that may involve one of his patients.

At the same time, his ex-wife shows up with her 14-year-old daughter from another marriage and abandons the girl, Grace, in Ed’s care. Left to deal with a moody, sulky teenager, Ed turns for help to the new deputy sheriff, Andi Pelton. As Ed and Andi’s relationship grows and Ed unexpectedly warms towards Grace, who thwarts him at every turn, he’s finally able to tame his “black dog.”

The author is a fine writer who does a wonderful job of capturing small town life. His dialogue is spot-on, and most of the characters are interesting and often amusing, especially Grace, who insists on calling Ed by his last name. When Grace learns there is no McDonald’s in the Valley, she frowns. “No McDonald’s? This place is, like, Death Valley.”

The author is a psychologist, which may have helped him create characters with realistic daily concerns. When everyone in the Valley notes Ed’s weight gain (in subtle and not-so subtle ways), Ed resolves to lose a few pounds. At the Valley Inn, Ed asks the waitress for cereal instead of his beloved high-fat breakfast. “‘I’m on a diet,’ he said, as if he were confiding a dire, perhaps fatal diagnosis.”

Readers may find the hate-crime scenario set-up forced and the characters involved in it a weak link. Overall, though, Climbing the Coliseum is a highly enjoyable novel. Fans of Ed, Grace, and Andi will look forward to the author’s planned sequels.