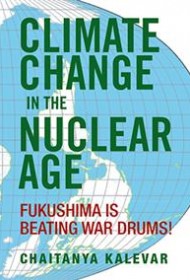 Chaitanya Kalevar’s Climate Change in the Nuclear Age is an amalgam of original lineated verse, lists, transcripts, web links, excerpts from historical documents, photographs from a variety of sources, and emphatic statements addressed directly to readers. Each page is filled with images and text, including many variations in font size and color. The visual experience is inundating, and readers are likely to be overwhelmed by the sheer volume of material presented here.

Kalevar, a self-professed “planetary patriot,” is clearly passionate and knowledgeable about climate change and other threats to global sustainability. However, his poems rely predominantly on scare tactics and didacticism, both of which tend to alienate readers. A representative poem such as “Mutate” illustrates Kalevar’s aggressive, lecturing tone: “Would you like a child?/ With a horn or a third eye?/ What if [sic] normal child is abnormal?/ So who cares? Let us have some nukes.”

At the end of most poems, Kalevar includes an entreaty or mandate, such as “Please reconsider your Carbon [sic] and Uranium [sic] based energy addiction!” These textual addendums further detract from the poems that precede them by not allowing readers an opportunity to ruminate and reflect on their own.

The final two sections of Kalevar’s book, “An Activist Agenda” and “Protesters Planetary Photo Projections,” are comprised of copious facts about ecological violence and impassioned diatribes on the part of this writer/speaker. These sections of the book read more as a disorganized encyclopedia than a literary testimony or manifesto, and given the sheer volume of information included and the intensity of the speaker’s tone, most readers will not retain much of this material.

Overall, this is an odd compendium of parts that requires rethinking in order to find a niche in the reading world. Well-known contemporary writers such as John Berger and Claudia Rankine, who incorporate both text and image into their works, might serve as effective role models in this process.