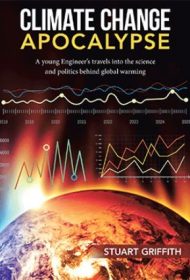 Mentions of climate change commonly raise the volume level of general discourse. Most people are believers or skeptics, with a few in the undecided camp. Stuart Griffith has written a novella that seems aimed at swaying the first and third groups.

Climate Change Apocalypse features Scott Paladino, a young environmental engineer embarking on his first job at a major oil company. Armed with knowledge he gleaned in his climatology studies in seminars, with visiting speakers, and supercomputer models, he believes he’s well-informed about climate change. Although he has minor questions, he thinks science has closed the discussion: that climate change is real and that CO2 emissions play a major part in the problem.

In the real world of APEXEnergy, he soon learns about conflicting viewpoints since he’s tasked with monitoring activists who are opposed to APEXEnergy’s work. Thus, he begins to question the accuracy of the “settled” theories of climate change. Eventually, he’s assigned to monitor a very vocal group of London activists and delves deeper into the topic.

Paladino’s natural curiosity leads him to his own research, and eventually he provides empirical evidence to his company that the idea of CO2 contributions to climate change is overblown. He proposes that the prediction of an apocalypse directly related to fossil fuel dependence is the opposite of reality.

Griffith attempts an interesting narrative, but his storytelling is uneven and his characters feel more like props used to broadcast his own opinions rather than well-rounded individuals in a storyline. In addition, his inclusion of a love story feels stilted and tangential to the plot. Readers should also be forewarned that his proposed facts are often bolstered by sources with known ties to industries that have a vested interest in climate denial.

As fiction, the book is a passable read. As a veiled treatise on human-caused climate change, this tale is unlikely to win over climate change believers, while those on the fence most likely will remain there.