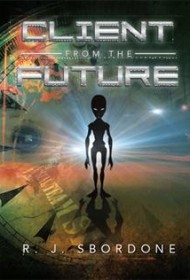 The story revolves around Joseph Morgan, a former USC football star and Navy SEAL legend who now works as a psychotherapist in Southern California. His world is turned upside down when he agrees to see a strange-looking man who goes only by the name of Val.

This new client—who has a large head, long neck, and oversized eyes—informs Joe that he is an alien/human hybrid from the far future and that without Joe’s help, humankind will be extinct in 56 years. The insanely advanced technology that Val shows Joe (faster-than-light travel, telepathy, time travel, etc.) makes Joe a believer, but before Joe can save the world from a masterfully subtle alien invasion, he and his corporate attorney girlfriend Amber become targets of alien-backed assassins. As Joe tries to keep his girlfriend and himself alive, he also begins to unravel a grand-scale conspiracy that goes all the way up to the POTUS himself.

The plot features virtually nonstop and compelling action. Although the storyline takes some weirdly coincidental and implausible turns at points, such breathtaking action—which goes back and forth through time—more than makes up for these minor flaws. At one point, author R.J. Sbordone even pokes fun at his hero’s uncanny ability to stay alive while dispatching countless alien assassins: “When this is over, I’m going to have to give Stan Lee a call.”

While not exactly a groundbreaking premise—and featuring a fair share of hackneyed clichés regarding aliens—the novel still succeeds, in large part because of a fully developed and endearing hero, a fluid and intelligent writing style, breakneck pacing, and more than a few bombshell plot twists.

This is a flawed novel, to be sure, but an undeniable page-turner nonetheless.