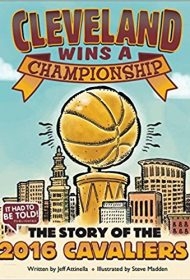 Author Jeff Attinella has translated his love of sports into a series of children’s picture books that tell the stories of epic wins. In Cleveland Wins a Championship, he relates the tale of the Cleveland Cavaliers’ historic march to an NBA championship in 2016.

Told in rhyme, the book begins by relating the drought of championship titles that Cleveland teams had suffered for 52 years. “The Indians haven’t won since 1948, thrice coming close, but it wasn’t their fate,” writes Attinella. Meanwhile, he notes that the Browns’ losing streak has created “dog days” for fans, who are depicted with bags over their heads and tears coming from their eyes.

When LeBron James joins the Cleveland Cavaliers, however, hope is reignited. The narrative laments James’ later defection from the team to Miami, then celebrates his return in 2014, which finally led to the Cavaliers’ triumph, capturing the NBA championship in 2016.

Attinella’s passion for the game is infectious, and Steve Madden’s cartoon-style illustrations are a highlight. The players depicted are easy to recognize and the pictures are often amusing. For example, former NBA Commissioner David Stern is shown standing on a ladder to shake James’ hand.

The story suffers some flaws as well. Rhymes can seem strained, and the syntax is often stilted: “It all got started Draft Day 2003,/ the Cavaliers took a kid from right down the street”; “For Cleveland, success in 2016/ came with relative ease,/ reaching the Finals again no/ problem, it was really a breeze.” Additionally, the author presumes readers will be familiar with names such as Cavs owner Dan Gilbert and Stern, which are dropped without explanation.

Antinella writes on the book flap that he hopes his stories will encourage parents and children to bond. Indeed, the author’s enthusiasm should provide a nice platform for parent-child interaction. Despite its rough spots, the book is bound to please young Cavaliers fans, in particular, and sports fans in general.