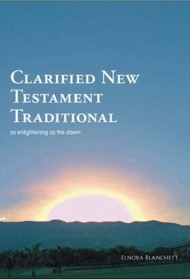 Over the years, many have declared the Bible to be the bestselling book of all time. If this is true (and there’s no reason to disbelieve it), it can also be said that it is the most translated book of all time. There are academic editions, Catholic editions, Protestant editions, liberal editions, conservative editions, abridged editions and even graphic novels of the Greatest Story Ever told.

As with all translated material, certain nuances are lost as words from one language are converted to words in a new language. Sometimes a scholastic interpretation, while precise in its word choice, may be just plain boring while a poetic translation, which may be thoroughly entertaining, may be called into question because it plays too loose with the original text. Yet, each translation is ultimately searching to convey a story to a reader. Elnora Blanchett’s Clarified New Testament Traditional is no exception.

This lay person’s edition of the four Gospels, the Acts of the Apostles, Paul’s epistles as well as the letters from the likes of James, Peter and John and the Book of Revelation is looking to cut through the overgrowth of dogma over the centuries and provide an accessible translation for general readers. This is an ambitious undertaking. Blanchett combed many different translations to create her simplified, yet not simplistic, work.

She should be commended for her research. Her prose is direct and easy to understand and her interpretation of the material makes for breezy reading; the stories seem to flow effortlessly. One quibble, which is never explained in her introductory material, is why she decided to capitalize so many words in her book. Maybe it was for emphasis, but the approach seems random and is distracting.

How accurate is this particular translation? That’s hard to say. Bible scholars will have to debate that issue, but those looking for an easy-to-read version of the New Testament will be impressed by Blanchett’s labor of love.