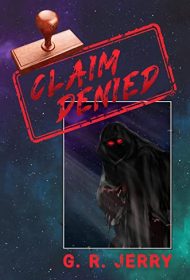 G.R. Jerry’s novel follows a put-upon insurance adjuster and his colleagues as they fall prey to a centuries-old evil.

Benny Johnson’s wife has just left him, taking nearly everything except his beer. But other than that, his daily grind at BestEver Insurance is getting off to its usual start. Then he sees a horrific, cloaked entity with piercing eyes in the bathroom mirror — an entity that speaks to him in the voice of one of his problem clients, Frances Murphy.

The plot thickens when an enraged Frances calls Benny, claiming he has been threatening her, appearing to her in a cloak through the bathroom mirror at her restaurant. When Frances meets a gruesome fate and the mysterious being attacks Benny’s co-workers, he joins the police to investigate.

The idea of a claims adjuster dealing with not only ornery clients but a demon-haunted bathroom is hilarious. Unfortunately, Claim Denied fails to capitalize on this potential. The novel’s biggest flaw is the detour it makes about one-third through, jumping back in time to introduce Lord Lawrence, a sadistic student of black magic whose actions are key to the present goings-on. The story then follows Lord Lawrence for an extended period. Readers interested in a humorous, contemporary horror story are unlikely to engage with a large chunk of gory but uninspiring historical fiction.

The present-day narrative also has problems. Jerry switches between narrators without giving them distinctive voices — they even use the same slang — as well as shifting indiscriminately between first and third person. Benny’s profession gets relatively little attention, despite a complex new adjustment claim Benny’s assigned near the novel’s beginning.

Finally, graphic torture scenes — historical and present day — feel out of place given the overall folksy tone of the Benny subplot, including the characters’ use of euphemisms such as “toilet word” or “F” for bad language.

Despite an entertaining premise, Claim Denied needs substantial revision before it is likely to appeal to its target audience.