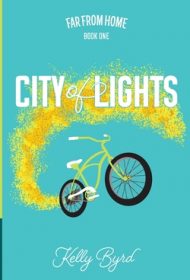 Kelly Byrd’s middle-grade novel, City of Lights, kicks off when 11-year-old Mary Jingo encounters a strange being in her family’s attic. The gnome-like creature, Rickface, sends Mary to another world to help battle the evil that is overcoming that magical land.

Awakening in a strange place, Mary soon encounters a welcoming party comprised of two more gnome-like people, a human woman named Van Clare, and a dragon-like creature named WindRunner, all who believe Mary is the key to stopping a magical threat known as The Void, which seems to be a stand-in for depression. This evil, which takes the form of a “creeping brown mist,” both causes and feeds off apathy, fear, and despair, and has been slowly overtaking the magical lands of LeeChee. Those who fight The Void use an opposite power known as The Everything, a stand-in for joy that is represented by overwhelmingly lovely smells.

As the party journeys toward safer territory, they’re attacked by a group of Shoeboxians—the beings responsible for the spread of The Void— and narrowly escape. Eventually, it’s clear that Mary possesses some sort of magical potential as she slowly learns about the mysterious LeeChee and the dangers it, and now she, faces.

The story’s worldbuilding is creative and amusing, with elements that middle grade readers are sure to enjoy, including Flikes (flying bicycles) and special goggles that allow wearers a limited form of telepathy. A colorful and playful cast treats young Mary as someone to be respected and befriended.

Unfortunately, as the author explores the fantastical world, descriptive but ultimately irrelevant scenes sometimes slow the story’s pace to a crawl. Additionally, Mary is mostly a passive follower, and the narrative often features characters explaining situations to her, rather than letting the story unfold through action.

Ultimately, readers will appreciate the engaging characters the author delivers, but the story takes too long to gain momentum, hampering enjoyment overall.