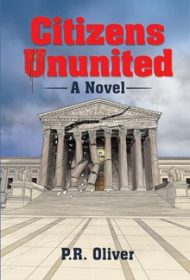 Author P.R. Oliver spins a wild conspiracy thriller based on the controversial Supreme Court decision commonly known as “Citizens United,” a case that upended the state of normal for political action committees. Despite the set-up, the story is generally not overtly political.

Senator Jennings Randolph, head of the Senate Campaign Finance Reform Committee, hires attractive, freelance investigative reporter Clancy McCleary to help his office investigate complaints regarding political action committees, known as PACs. They have a significant target in United Patriots of America (UPA), a right-wing cabal dedicated to patriotism and free enterprise— not to mention racism (their base is beleaguered white men).

Simultaneously in Boston, we meet Alex Pipe, a data wrangler with a defense contractor, and her new roommate Renata Russo, the daughter of a powerful mafioso. When McCleary gets too close to the truth about the UPA, readers learn that she was Russo’s college roommate. Soon, Pipe and Russo are thrust into McCleary’s dangerous investigation. Their only ally is Pam Robinson, an FBI agent who’s gone off the reservation in pursuit of the UPA

The story’s commendable heroes, propulsive pace, and intriguing ethical gray areas—the book asks hard questions about what its heroes are willing to do to beat the bad guys—offer left-leaning fans of Tom Clancy novels a spooky thriller worth reading.

The novel is not without its issues, however. There are a few too many deus-ex-machina coincidences that impact the plot’s credibility, and the female characters are occasionally described in off-putting sexist terms: they’re all “gorgeous,” “buff and hot,” or “very well built.”

Overall though, the narrative is driven by strong women, a twisty plot, and some modern political context that rational citizens should find terrifying. A coda about a plot by the Russians to elect a pro-Russian American president, is eerily prescient.

Also available in paperback and e-book