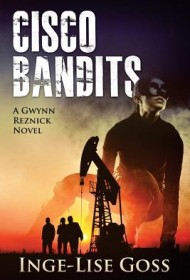 In Inge-Lise Goss’ tightly plotted contemporary whodunit, part of a series featuring protagonist Gwynn Reznick, the body count rises as a trio of high-end private investigators move into a New Mexico oil town to find a killer and solve the mystery of missing corporate profits.

At the bequest of her investigator boss and fiancé, Ruben, Gwynn, goes undercover at Prudell Energy Company working as an accountant. Although she doesn’t know precisely what her assignment is, Gwynn discovers something odd in the books. Further, believing she witnessed a murder while walking home one night, Gwynn recklessly pursues clues leading to one or more potential killers, despite failing to get Ruben’s OK. As the story unfolds, Ruben sends in two reinforcements—one a woman posing as Gwynn’s cousin—both armed with considerable field experience.

The novel has a Charlie’s Angels’ feel to it: pretty girls and a remote boss. No one will confuse her novel with more thoughtful John Sandford or Jonathan Kellerman suspense stories. Goss’s greatest strengths, which are significant and not easily mastered, are authentic dialogue and solid plotting. She expertly tosses in an intriguing subplot regarding the town’s scarlet woman and her odd son that may or may not be relevant to the mysteries at hand.

A few credibility issues exist: One of the operatives kills two men in self-defense, and the rest of the team removes all evidence that the operative was there—and hides one of the bodies. They never seem bothered by their tampering and failure to alert authorities. Gwynn, the primary character, seems immature as she pines for Ruben, who pulls all the strings from afar. Also, Gwynn worked as an accountant before Ruben hired her but somehow became proficient in investigation and self-defense. We never learn how that happened (perhaps it’s detailed in a previous story?).

Readers may trip over these elements. But overall, the book’s writing is solid and the story is engaging, providing a fast-paced, satisfying read.