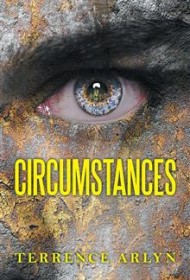 In this novella, narrator Jackson Brooks is a capable young man with an eye for the good life and the smarts and education to achieve it. But, as the title aptly suggests, “circumstances” have a way of thwarting the best intentions.

Readers learn that Brooks finished at the top of his class with a double major in fine arts and economics from Temple University, but a violent encounter on graduation night earns him a two-year stint in prison. Back on the street, he soon talks his way into a job in which he quickly proves himself. But success is heady, and Brooks, whose mother died when he was two and whose father is “worthless,” seems to lack the necessary moral foundation to do the right thing. Although he knows better, he acts carelessly, selfishly, and wrongs the very people to whom he owes his success. Ultimately, those choices compound.

Arlyn is an engaging storyteller with a natural voice. But the novella is riddled with clichés, stereotypes, and most unfortunately, simple editing errors. On nearly every page, there are punctuation and grammar mistakes and/or unclear sentences. Early on, for example, as Brooks is confronted by two other students, Arlyn writes that one of them “bumped pass [sic] me.” In another, he notes that, “They had my blood following [sic].” There are frequent changes from past to present tense, and the sex scenes read mostly like clichéd soft porn. To Arlyn’s credit, he pulls off an ending that is both surprising and, while calling for some suspension of disbelief, satisfying.

Despite the shortcomings, at its core, this is an interesting story about what happens when people make bad choices. But because of the many writing weaknesses, it is likely to be enjoyed by a limited readership.