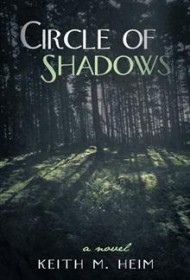 It’s 1946 and 15-year-old Steve Bowman ends up in Morefield, Alabama after hitching his way south, escaping an emotionally and physically abusive father. He arrives with only the clothes on his back, penniless and starving. Almost immediately, he befriends Awillah Pike, an elderly woman living alone in a rundown home who has a borderline dilapidated shed in her backyard with a minuscule room on the second level.

Because Awillah never frequents her shed, Steve claims the room as his new home and starts looking for ways to earn money. One of the many jobs he acquires is working for the local newspaper. Here, he learns how to operate the printing press and eventually forges documents to attend high school. But Steve, always fearful of being caught and returned to his father, creates a series of lies that has him constantly on edge and forces him to keep everyone in his shadowed life at an arm’s length.

Heim does a superb job keeping the reader interested in Steve’s unusual, yet understandable, circumstances. Even Steve’s lies are tolerable, since Heim gives the reader just enough exposition to understand the abuse he escaped. The ending, however, is rushed and told using too much summary. Also, Steve comes across as a bit too perfect–he works several jobs, maintains a perfect GPA, is an extraordinary singer and, despite the backlash, befriends a young black man.

But Steve’s ability to take care of himself at such a young age, as well as the ever-present concern that he’ll get caught, makes Heim’s Circle of Shadows an engaging, pleasing read.