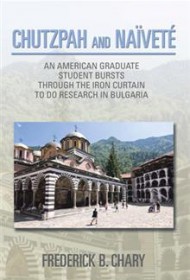 Beginning in the mid-1960s, historian Frederick B. Chary regularly traveled to Communist Bulgaria to research its history from the Middle Ages. Over the years, he also witnessed history being made as liberalism spread throughout Eastern Europe and the Soviet Union. His memoir chronicles his travels to international conferences and the barriers he encountered whenever his research touched on politically sensitive topics. Personal anecdotes add color and intrigue to this name- and place-filled recitation, though it often bogs down in esoterica.

As a graduate student, Chary first visited Bulgaria in 1966 to study its role in the Holocaust. He had read that while Jewish populations in Europe plummeted between 1939 and 1945, Bulgaria had 2,000 more Jews by the war’s end. In his 1969 dissertation, he concluded that the Jews that survived in Bulgaria did so because the government was forced by public outcry (and some parliamentary opposition) to spare Bulgaria’s Jewish citizens from deportation, “giving credit neither to the king [Bulgaria’s King Boris III] nor the Communist Party.”

His thesis, published in 1972, received mixed reviews in Bulgaria. The “official government line” was that Chary was “wrong for not crediting . . . the Communist Party,” and others “did not like the fact that I did not credit the king.”

Over the next 30 years, Chary taught at Indiana University Northwest in Gary and continued his travels, at times dealing with Communist red tape and suspicious officials. In 1984, for example, he arranged to attend the UNESCO conference in Belgrade, but when a former student was accosted by a Belgrade official who asked whether “that Bulgarian agent Chary and [his] Albanian-loving wife” were planning to attend, “The implied threat was enough for me to skip the conference.”

Such tales would enthrall the average reader. But, with its lists of Communist political players and details of academic conferences, Chary’s book may appeal most to a more scholarly audience.