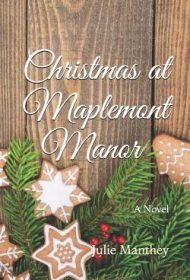 Julie Manthey’s Christmas at Maplemont Manor, is a modern-day romance set during the two weeks leading up to Christmas in the idyllic small town of Maplemont, New York.

The story involves two strong-willed protagonists: the self-sufficient, internationally trained chef, Noelle Kringle, who returned home from abroad after a family tragedy and took over the family bakery; and multi-millionaire, aloof Grant Fitzgerald, who inherited his grandfather’s manor and returns to Maplemont after selling his software business in Manhattan, despite worries: Will he be accepted for himself? Will he find Maplemont as exciting as city life? What will he do now that he sold his business?

When Noelle and Grant are thrown together to organize the town’s Christmas Eve gala, strong chemistry draws them to each other even as misunderstandings push them apart. For example, every time Grant convinces Noelle he’s interested only in her, young wealthy Imogen Prescott seems to show up or send Grant a text, sparking Noelle’s doubts. Complicating matters, Grant’s socialite mother prefers the shallow Imogen.

Colorful town characters add to the intrigue: Noelle’s loving sister Holly, who can read Noelle’s moods based on what she bakes; Noelle’s close friend and bakery assistant, Skye; Grant’s best friend and business partner, Porter, who sees through Grant’s defenses.

In several chapters, the story slackens when the author goes inside both Noelle’s and Grant’s heads in the same scene. The characters think too much about each other’s feelings and motives, slowing the narrative and contrasting poorly with the tautness of other chapters.

Overall, though, Manthey excels at creating tension while building toward a satisfying (and all-important) first kiss. Her voice is playful, witty, humorous, and serious in all the right places as she deftly unspools a strong plot, realistic dialogue and several effective smoking guns.

Christmas at Maplemont Manor is a light and engaging romance with characters readers will care about as it delves into the many mysteries of what makes the human heart tick.