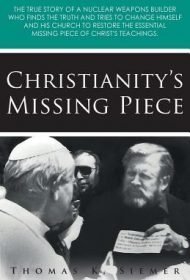 In Christianity’s Missing Piece, peace activist Thomas K. Siemer chronicles his life story and search for purpose and meaning in a world where the possibility of nuclear war is all too real. Part spiritual autobiography and part call to action, the author traces the factors that ultimately led him to encounters with Pope John Paul II in a quest for world peace.

In a wide-sweeping narrative, Siemer, a devout Christian and Catholic, recounts his WWII days in the Navy; his post-war love affair with a beautiful Italian woman; his conflict between wanting to become a priest yet also desiring a wife and family. The author ultimately marries and has children, but he battles with alcoholism, which he attributes to his work at Rockwell International, a manufacturer of nuclear missiles. This was at odds with his wish to love God by promoting peace. Eventually, he leaves his post to focus on advocacy.

Siemer’s book is a fast read, and his story is often engaging. He knows how to tell a story and how to develop dramatic tension, especially when recounting an attempted sexual assault by a man in Rome while he was a seminarian. He also writes eloquently about mystical experiences in Mexico that led him to a dramatic encounter with the Pope in 1980 to try and change the Church’s stance on nuclear weapons.

The book, however, requires further editing. Missing words and awkward sentences are distracting (for example, referring to God, he writes: “I could not believe that He made a mistake when He created black people, Polish, and other different races and nationalities”). Sometimes, adequate context is lacking, and readers can also find themselves connecting dots between scenes on their own.

Still, Siemer has led a bold and exciting life, and Christianity’s Missing Piece is a thought-provoking read. Fans of peace activists Daniel and Phillip Berrigan will find much to appreciate here.