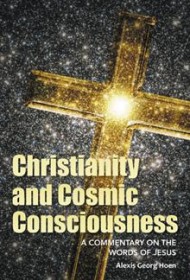 Physician Alexis Georg Hoen, having encountered many religious beliefs, has written a revelatory book exploring how Christian theology can be understood universally, not through dogma but through Cosmic Consciousness, our unity with the universe and mind of God.

Using research from credible theologians and other experts, Hoen argues that if we strive to view religion through Cosmic Consciousness, we can see the teachings of Jesus Christ as not simply guidelines for how to achieve salvation but as a means of “living beyond oneself as an integral part of the cosmic whole.” If we see the need for that, then we also see that salvation necessitates a loving relationship between man and his entire environment; establishing this loving relationship then becomes our purpose in life.

Hoen insightfully explains that the last seven statements made by Jesus on the cross, the Beatitudes, and even the Lord’s Prayer have been commonly interpreted as validations of the historical actions of Jesus. Yet Hoen suggests these can also be understood as guides to acting morally and lovingly so that our minds might be united with God’s universe and ultimately with God, achieving Cosmic Consciousness.

The author shows how the idea that punishment and revenge are justifiable has been ingrained in our thoughts, along with other wrongful religious teachings, none of which lead to Cosmic Consciousness. In contrast, he uses Jesus’s seven statements and others to show that forgiveness leads to universal love.

All of his insights are clearly explained and skillfully substantiated by biblical and scholarly references — some of the latter are even entertainingly surprising, such as when he discusses Dostoevsky and Tolstoy.

Hoen’s short book is a valuable work of scholarship, the sort one can read many times to gain richer insights. Although this isn’t a light read, it holds appeal for academics and non-academics alike. And because his insights are not limited by religious orientation, even non-religious seekers can appreciate the value of his notion of Cosmic Consciousness.