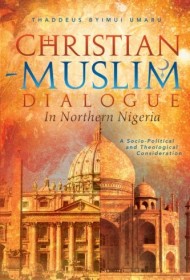 An important component of most religions is a moral belief system, one that sets a standard for living a loving and compassionate life. Yet, many times religious proponents fail to live by these codes of ethics, leaving people and societies, at best, lost and at worst, dead. Why this happens, specifically between Christians and Muslims in Nigeria, and what can be done in the aftermath of broken promises is at the center of Thaddeus Byimui Umaru’s Christian-Muslim Dialogue in Northern Nigeria.

While many in the modern world view religion as a problem, the author sees faith as a solution to division and hostilities that plague this western African country. Religions, Umaru writes, can “promote positive efforts for better mutual understanding.” For the author, this can only be done through positive communication. Citing the impact of British Colonialism and the arrival of Christian missionaries in the 19th and 20th centuries as a major force that divided this predominantly Muslim country, the author stresses the need for families and women to become ethical leaders, promoting mutual respect of all people and embracing such ideas as UNESCO’s Day for Tolerance to weaken stereotypes and increase religious literacy.

Umaru, a Roman Catholic priest, has created an intelligent, compassionate and deeply spiritual examination of the divisions and failures that exist between Christianity and Islam in this region. His book is well thought out, and the introduction does a fine job of outlining his chapters for readers. His writing is clear, his ideas thought-provoking. Further, his footnoting, citations and annotations contribute immensely to the book’s professionalism.

Though the book deals exclusively with problems in Nigeria, that country is just a microcosm of the difficulties that many face in varying degrees around the world. Clearly, this is a specialized book about a single country, but there is much for general readers to learn here, universally, about forgiveness and how to walk the sometimes dangerous road to peace.