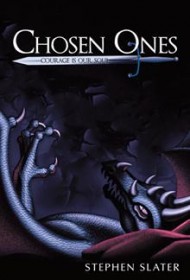 Stephen Slater doesn’t waste any time in setting up a complex mythology in Chosen Ones: Courage is Our Soul.

The slim fantasy’s prologue reads like a brief passage in a history textbook. Slater details a regal struggle with enough families, armies and subplots to fill a Shakespearean play. The story’s outline should ring familiar for even casual fans of the genre: forces of good and evil collide; a betrayal leads to the defeat of a noble cause, and the salvation of a mystical land ends up in the hands of unlikely heroes.

The tale begins with an epic battle between the noble hero Dracell and the evil, imperialistic Tragens’ army in the imagined realm of Umarus. Through the betrayal of the villain Clasus, whose scheming is key to defeating Dracell and the Chosen Ones — a noble group of mercenaries sworn to protect the throne for its rightful heirs — Umarus eventually falls.

Decades after Clasus’ rise to power, only two true heirs to the throne and the Chosen Ones’ legacy remain. Slater tracks the struggles of Adria and Sammy, two infants hidden by the last of the Chosen Ones during the power struggle. Now Sammy must face Clasus to win back the throne for Adria.

The setup feels more than a little derivative, but that’s not the major problem with Slater’s uneven foray into the fantasy world. A shallow and unrealized background forms the rickety basis for the story, which suffers from far too little editing and detail. Frequent misspellings derail the story’s flow, and Slater hops from one scene to the next without the due amount of description and exposition. That’s fatal in this genre, one that depends on believability and depth to succeed.

At less than 100 pages, there’s hardly room to get attached to the characters. Add this to the distracting editing errors, and it is, unfortunately, nearly impossible to get immersed in the world of Umarus.