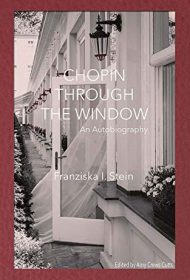 From a life rich in material, Franziska I. Stein crafts an engagingly candid personal narrative with an outsized yet closely observed historical canvas in her autobiography, Chopin Through the Window.

Stein begins her absorbing story immediately post-World War I in Czechoslovakia as she is born out of the ashes of the Austro-Hungarian Empire. Proceeding to her teenage years, she describes seeing her home region, the Sudetenland, overrun by Nazi troops. Stein’s account of the subsequent war emphasizes that “the Germans paid a heavy price for the injustices launched from their own soil.”

Working as a hospital nursing assistant during the war, she once saved a wounded officer whose intestines began spilling out of his stomach and later treated civilian survivors of the horrific Dresden firebombing. Following WWII and under Soviet occupation, she managed to escape mistreatment by the often-brutal Red Army. However, her husband, Georg, barely survived a Russian POW camp, and Stein and her young daughter, Barbara, were, as ethnic Germans, eventually expelled from their home by the reinstated Czechoslovakian government.

Reunited in Berlin’s American-administered zone, Stein and her husband eventually left West Germany. While this part of the story becomes less riveting than the author’s war years, it remains interesting and engaging. Enthusiastic travelers will enjoy vivid recollections of Colombia, where she and her husband opened a hotel in 1956 and appreciated the rich pre-Columbian archaeological heritage, and Colorado, where they opened a restaurant in 1966 and enjoyed a colorfully Wild West-like atmosphere. Stein’s writing is thoughtfully detailed and smoothly polished throughout and, at times, admirably frank about painful personal matters, such as her troubled marriage.

Closing with an explanation via flashback of her title, which came from hearing a Chopin mazurka in her hometown not long before her exile, Stein’s book, edited by her granddaughter, leaves readers with a new perspective on the 20th century’s greatest conflict and a fine example of personal reminiscence interwoven with history.