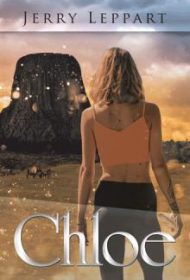 When a young woman learns she’s a clone, she must face hard decisions about her future in Jerry Leppart’s novel Chloe.

As the story opens, Chloe, 21, is attending her father’s funeral and pondering the news he related to her before he passed that she was cloned from her mother, who died from injuries in a car accident. After learning of her history, Chloe visits the doctor who performed the procedure. He explains that her life expectancy is unknown and that childbirth may put too much stress on her body. But Chloe has always dreamed of being a mother.

In search of answers about her life and identity, she undertakes a road trip, stopping at historical landmarks, including Mount Rushmore, Wounded Knee and Little Bighorn battlefields, sharing her knowledge of the history and culture of the area. On the road, she meets and falls in love with Billy and makes several other friendships before returning home, where she’s forced to make a decision that could cost her her life.

This story’s strength lies in the author’s knowledge of Native American history and geographical landmarks. Leppart’s style is straightforward and an easy read with a mix of humor and mysticism. But information is often repeated and some of the plot points don’t serve much purpose.  For example, the book opens with Chloe attending her father’s funeral but then moves back in time to her visit with the doctor three days prior. Both chapters contain the same information about her future. Likewise, Billy repeats information about his childhood on an Indian reservation. It’s also not entirely clear how Chloe’s father delivered the news of her cloning or her initial emotional response to it.

The story is well-written, with the exception of the repetitive information. It’s most likely to be enjoyed by readers willing to overlook the issues mentioned and who appreciate Native American culture and history, as well as armchair travelers in the U.S. and Canada.