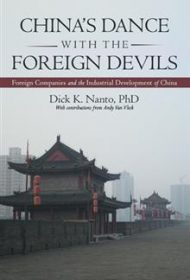 China’s prodigious economic growth and entry onto the world stage have changed the geopolitical landscape. Grave concerns over the militarization of the South China Sea and China’s relationships with its neighbors abound. Author Dick K. Nanto makes a significant contribution toward understanding these phenomena with this economic history of China.

Nanto holds a PhD from Harvard and is a retired economist who provided economic analysis for the U.S. Congress on China, Japan and Korea. Beginning with the dawn of the Mao era, he takes readers through the Great Leap Forward and Cultural Revolution periods, through the post-Mao reforms, and into China’s emergence in the 21st century. He explains that ethnic Chinese from Hong Kong, Taiwan and Singapore were key investors in China as it began to open to the world after 1978. Contrary to the Maoist, central planning model, China’s economic growth followed decisions first made on a small scale in the border regions. Only later, when market-oriented reforms proved viable, did the system begin to reform on a national scale.

Nanto shows that China is now moving to replace foreign companies with domestic firms capable of competing in an international marketplace. In his conclusion, he cautions, however, that China faces a rocky road ahead as it deals with overcapacity, a perception that China’s products are poor quality, and even rumblings that portend political instability.

Copiously illustrated with graphs and tables, the narrative supports its premise with numbers and hard facts. The author’s ideas are well-documented and delivered in a readable style, and the book offers a compelling, detailed account of modern China. Fortified by his personal experiences in the region, as well as his work for the U.S. Congress, Nanto paints an irrefutable picture of China’s economic history.

Since trade agreements with China have become a political football in the current electoral season, Nanto’s timely, accessible study is for any reader who seeks an objective, non-partisan viewpoint on the giant of Asia.