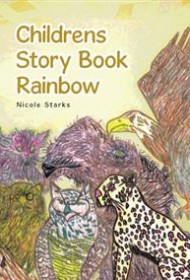 The five stories in this book are extremely short (no longer than one page each) and leave readers hoping for much more. Readers learn about Lorenzo and Business, two owl friends who simply move from one place to another. And Leeo, a circus leopard who, we’re told, has created many special memories for children and adults after years of performances. The complete text of the story “Fonzee’s Reflection” reads: “Fonzee lives in Arizona, [sic] it’s quite a bright country for a small young kitten. Just taking a cat walk, Fonzee walks up and back and forth around a pond nearby. He gazed at the water until he noticed another kitten looking at him, [sic] it was his reflection.”

Often the tales seem more like introductions to the book’s animal characters than complete stories. This tack could work as a foundation for children to use their imaginations to create their own stories, or even if there were an explicit prompt from the author asking “What do you think happens next?” But as presented, the stories seem more like truncated fables, with the payoff strangely absent.

Another major problem is the clear lack of editing. Misspellings include “choosen” instead of “chosen,” “glayding” instead of “gliding,” “purched” instead of “perched.” Other mistakes involve tense and punctuation errors and run-on and garbled sentences; for example: “The ring maters [sic] most expensive chariots and traveling arrangements, Leeo even has a small circus of his own.”

The illustrations in Childrens [sic] Story Book Rainbow are interesting, if a bit crudely drawn, and executed in a bright, bold rainbow of hues. But the cover, though attractive, is unfortunately merely an amalgam of the interior images, layered and flipped.

All told, this storybook is a commendable effort, but given the flaws mentioned, it is one that largely fails in its execution.